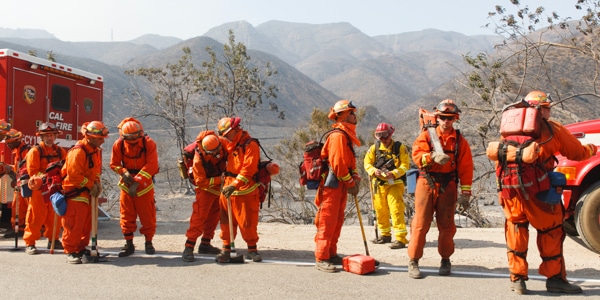 As climate change becomes more prevalent, regions affected by wildfires may start to see higher frequency in the coming years. According to a 2006 research article in Science Magazine, it was reported that between the years 1986 and 2003, the frequency of wildfires jumped four times and burned six times more land area. As the frequency of wildfire has been increasing so have been the fatality rates for firefighters. In a NWCG Report on Wildland Firefighter Fatalities in the US it was reported that causes of fatalities range from entrapment, falling trees, vehicle, and aircraft accidents.

Challenge
The technology used to combat wildfires has improved greatly, but firefighters on the ground are still often blind to dangers that lie in front of them. The challenge with the technology is that many of their devices are not interoperable, which means devices are unable to communicate with one another to solve problems faster. It is often up to the firefighter or dispatcher to analyze data on the fly to diagnose situations.

IoT Use Case
A firefighter is making his way through a forest searching for hotspots. A sensor on his smart suit (which has a policy programmed in Connect) picks up a significant spike in temperature. The firefighter recognizes this by looking at sensor displays on his suit but doesn’t think to raise alarm that he may be in danger. However, a policy programmed into his suit triggers a condition, which dynamically invokes a health policy that begins to closely monitor his vitals. The policy associated with the sensors on the smart suit also triggers a condition, which finds the closest drone that is airborne in the area. Once the drone is found, it pairs with the firefighter’s smart suit to determine the exact location of the firefighter. Once in the area, the drone’s own sensors and camera (using computer vision and infrared) start circling to pinpoint the hotspot.

Once the drone pinpoints the hotspot, it communicates with the firefighter and a dispatcher. A policy also determines if there are other available firefighters in the area – available meaning that they are not in a similarly dangerous situation if so, those firefighters are not dispatched. A policy pairs with the exact hotspot location and sends detailed coordinates to the other firefighters’ AR glasses. Since a condition of potential threat has been established, all arriving firefighters health policies are also invoked. So that history of each of these triggered conditions are not lost, each is written to the blockchain.